Both my wife and I were very excited for pickup day. We completed all the paperwork online the night before, made the last payment, and then talked about it. We were scheduled for 4pm, and had planned to hike with our sons during the day and then head over.

While getting ready in the am, one of our party wasn’t feeling well and not up to hiking. We decided to meet at a local business and then decide what to do. As we were talking, I got an email from Telsa that the car was ready. I sent a note to the local service center asking if we could come early and they responded in under a minute saying to come over. As a group, we prefer to be together, so we scrapped hiking and decided to run errands, get lunch, and get the car.

We drove over and parked, walking into a quiet and somewhat deserted service center. One customer waiting, and one employee there. He took my name and said he’d go get paperwork. While he did, we checked out a gray Model Y in the showroom, which was the first time my boys had been this close to one.

After about 10 minutes, the salesman came back with paperwork and wanted me to accept delivery in my account so we could start programming. However, we wanted to see the car. He said that was fine and took us out to the car, which was on the Supercharger there. An industrial sized box, which didn’t look anything like the ones I’ve seen in parking lots.

We were about 5 hours early, so I’m not surprised things weren’t complete. The car was at 73% and charging, and he showed us how to get in and left us alone to look around. Time to go to work. 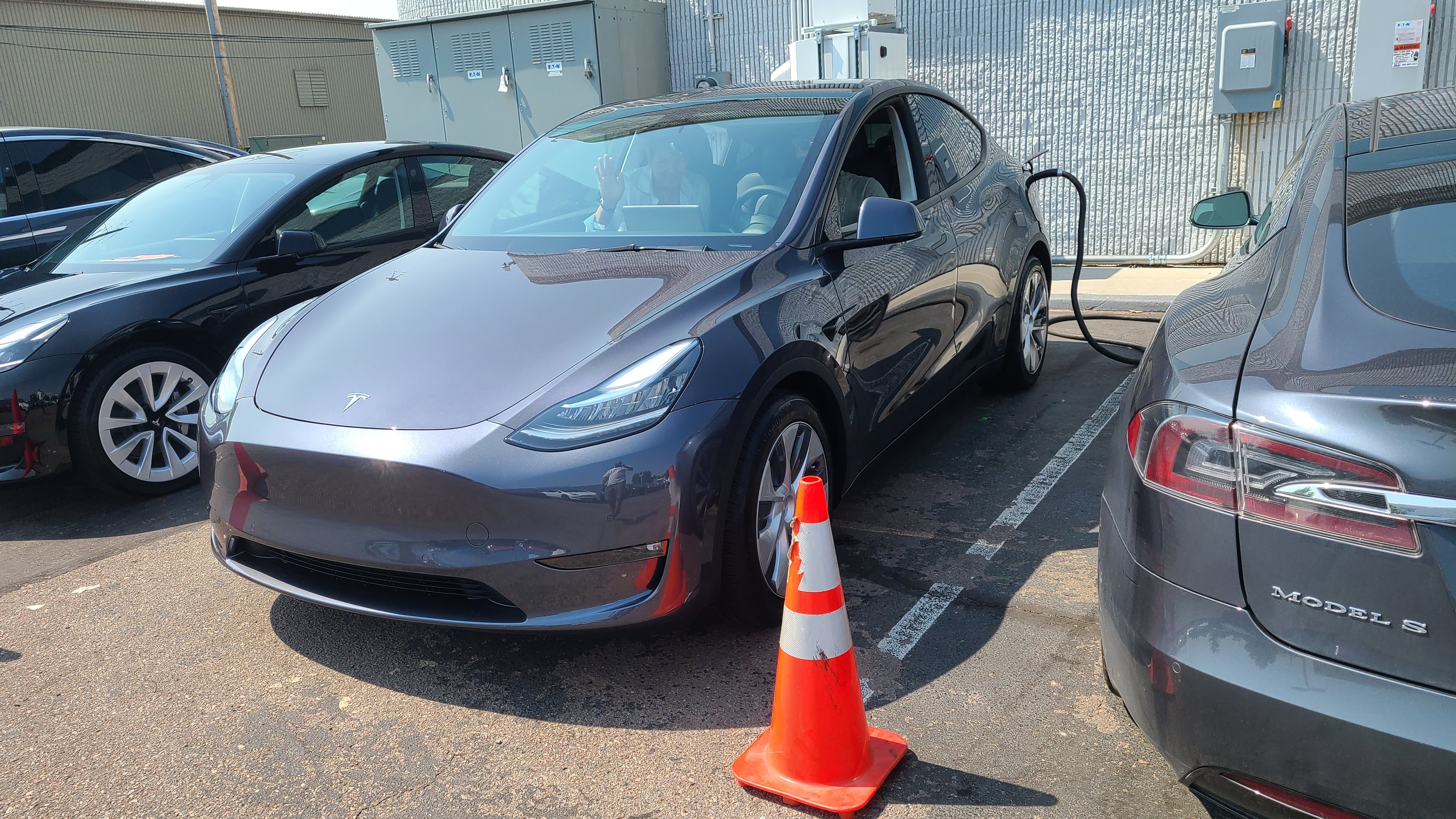 We ended up using this checklist, both the paper one for me and the mobile one for my son. I made a quick video of the process of inspecting the car. It was hot, and my wife and eldest were patient, but ready to get moving.

There is a video of this post on my channel, if you want to watch and listen to me talk about this part of the experience. Overall, everything looked good. We kept looking closely and testing things, learning about how to turn on various features or check things. My wife ended up turning lights and other features one twice, as we both moved around the car at different speeds and in different directions.

I don’t know I’ve examined a car as closely as I did for this one, which was interesting to me. In general, I’ve looked for major issues, not minor things. My son did see the front hood slightly mis-aligned to one side. It’s very minor to me, and really, I doubt I’d have noticed if we were’d really looking.

There was a minor scratch on the passenger rear wheel cover, but too small for me to care. Really, a replacement would be a waste of resources, and this isn’t going to affect me. I’m not sure I won’t get a few scratches on it myself.

There was a bit of plastic stuck under the headline in one place, which looks like a piece of protection that tore as someone was removing it. Really, it’s too small to make me care. I’ll cut or work it out somehow.

The only thing worth mentioning to me was the driver side rear coat hook. The hook wouldn’t stay closed. My son had to press it 48 times to get it to stick, and then the next time it was used it came down. I don’t use those often, but I do sometimes in the BMW, so we did want that fixed.

Once we were satisfied, we went inside and got a salesperson. They came back, I accepted delivery in my account and signed paperwork. Everything was ready in a folder, and I signed 5 or 6 times, standard forms. Way easier than any other car.

Then they helped us program keys and phones. I added my wife and son as drivers, and they got physical card keys to keep around.

It was a 45 minute process, mostly because we inspected the car. Programming keys and getting them with their own Tesla accounts was about 5 minutes and then we were off.

Next: The First Drive