Not a terrible year for us, but at times it’s seemed like the Terrible Twos with Kendall, our now eighteen-month-old daughter. She’s quite different from the boys, as we’ve really come to learn this year. Much more ambitious (Tia’s word), much more extreme, going from happy to upset in a split second (sometimes while running across the room). We think she may be the biggest reason Tia and I are now aging 3 years for every year that passes. 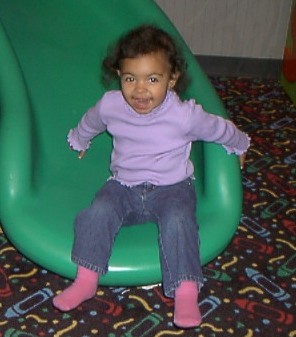 And much more cuddly than the boys, which Daddy Bear loves. Kendall is Daddy’s girl and she’s really come out this year. Everyday I come home from work, she runs up to me. She loves to be held, loves to hug, loves to be close. She’s started to talk and is now waving good-bye to everyone. We still haven’t figured out why she likes some people and not others, but quite a few people that greet her with a smile get a furrowed brow and a scowl.

to matter. She hugs all the stuffed animals she sees in stores and starts stomping her feet, pointing frantically, and wiggling when we go to the zoo. This fall the local grocer started stocking a variety of stuffed bears and placed them above the freezers (both sides) on one long aisle. Kendall went crazy and it took us 30 minutes to get through there, stopping to hug each bear as we went.

Which seems funny as “G.I. Joe” (Delaney’s new persona), hates animals. Well not all animals. He likes giraffes at the zoo and some cats, but hates dogs and all stuffed animals. Walks around the house (to the joy of Tia) singing “Two Stupid Dogs, two stupid dogs”. We’re working on that one.

We also recently heard Delaney say he likes trains “only a little bit”. Did you hear a “Hallelujah”? After 2+ years of everything trains (he’s now 4) (and only some things are trains now), Delaney wants to be a “Joe”. He runs around the house fighting “bad guys” and saving the day or world or universe, kind of alternately. I get questioned most nights as to whether I’m a “Joe” or a “Cobra” and then enlisted or attacked, depending on the answer. It’s OK - we’re just thrilled to finally be able to venture away from the train aisle at Toys”R”Us this year while Christmas shopping for Delaney.

It’s interesting for me (not so much for Tia), remembering my youth with army men and fighting battles. Kyle never liked the military so much. We’ll see where it leads. But for now, Delaney wants to play football when he grows up (alternating with baseball and basketball), then be a “Joe”, and save the day/world with a plane of some sort as well as fight fires in his spare time. Of course, as I edit this, he wanted to go to the train museum today (we went :)). 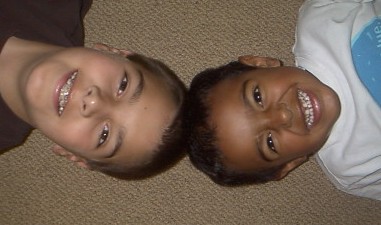 Our oldest kid, however, is far beyond nanny time. Moving into young man phase where the parents are getting less cool. After his choir concert at school, we went to DQ to celebrate and Kyle decided to sit with his friends, not us. He’s not embarrassed of us… YET! Another little evolution in parenting for us to endure. Kyle’s doing well, now singing in the choir at school, enjoying that and sounding great, and getting ready to leave Cub Scouts in a couple months and move into

Boy Scouts. He’s still got Eagle as his goal and Tia and I are rooting for him. We’re both surprised and extremely proud that he’s continuing on.

Kyle stopped piano this year and started and stopped violin. Kind of sad for the parents after a great spring piano recital and us enjoying his playing, but he wanted a break. Hopefully we’ll see him pick it back up; he’s pretty good and it would be a nice complement to his singing.

And the biggest kids in the house? Whew it’s been a tough year. Two kids in diapers at the start (only one now), nanny searching, my company folding, an 8 week job search, Tia’s job getting busy, migraine headaches requiring an ER visit, Bronchitis, my car dying, the Beemer barely making it… Man, it’s been tough.

But enjoyable also. We got to see our little girl walk and (starting to) talk. Saw Delaney grow out of diapers and bottles. Saw Kyle mature more and read like a fiend. He finishes lots of books in hours now. And we saw our careers evolve and bloom.

Tia got put in charge of a product for her company as the liaison between engineering and the field. It necessitated some more traveling (groan) and more work hours, but it was a nice change for her and has refreshed her feelings about the company. She’s really enjoying her job again. One of her new responsibilities includes training a core team for her product’s support. After giving a training course at company headquarters, she’s been asked to present the training in London. She also completes 6 years with the company in January, which earns her a month off with pay. She’ll either get a lot done around the house or get caught up on daytime television. I’ll let you know next Christmas.

I saw my previous company fail in the Spring. Sad and tough, but after 9 weeks off, I started up with JD Edwards and have really enjoyed it. My side company, sqlservercentral.com, also took off this year and made money for the first time. My two partners and I used our company’s profits to fund a trip to an industry conference (sqlpass.org) in Seattle this fall and spoke at 5 sessions. A nice achievement in a side hobby I never thought would grow profitable.

Tia and I have been pushing the envelope in the world of physical activity. We’ve both been doing the “Body for Life” program since May with incredible results. We feel great and our energy levels are at an all time high. We even got the “14-er Fever” this past summer, climbing 2 of Colorado’s 14,000 ft. peaks and putting a check mark next to another item on each of our “life lists”. Kyle came along for the second “peak-bagging” and he wears a pin on his Scout uniform to tout his achievement.

Overall, 2002 has been a tough year, one of change and growth, and one we look back on with fond memories. 2003 looks to be as busy and exciting as any year with the kids growing more and the adults becoming more successful. We wish everyone the same joy, luck, and happiness we have enjoyed and keep checking at www.dkranch.net for updates. 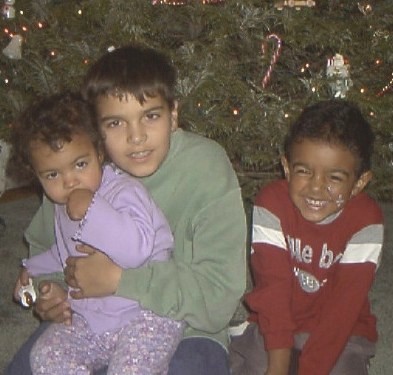